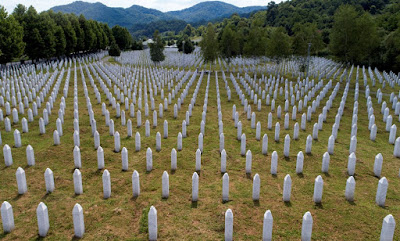 At the genocide memorial centre outside Srebrenica, thousands of simple white gravestones stretch across the gently inclined hillside for as far as the eye can see. Nearby, over a number of days in July 1995, Bosnian Serb forces systematically murdered around 8,000 Bosniak (Bosnian Muslim) men and boys. It was the worst crime of the Bosnian war, and remains the only massacre on European soil since the second world war to be ruled a genocide.
Even today, remains of victims are still being found and identified. Owing to a cover-up operation to hide the crimes by digging up and dispersing the contents of mass graves, there are cases in which partial remains of the same individual have been found at as many as five sites several miles apart.
At a 25th anniversary commemoration on Saturday, at least eight more victims will finally be laid to rest at the cemetery. A quarter of a century after the events, however, the truth about what happened at Srebrenica is being subjected to a growing chorus of denial, starting in Bosnia itself and echoing around the world, moving from the fringes of the far right into mainstream discourse.
more