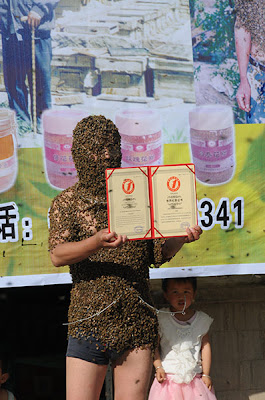 "A senior Egyptian general has reportedly admitted that women arrested at a demonstration earlier this year were subjected to “virginity checks,” saying that the practice was necessary to protect soldiers from accusations of rape.

“We didn’t want them to say we had sexually assaulted or raped them, so we wanted to prove that they weren’t virgins in the first place,” the unidentified general told CNN. “None of them were.”

Egyptian military officials had previously denied allegations that soldiers had conducted the "virginity tests" on women detained during a protest in Tahrir Square that occured nearly a month after Egypt’s longtime president, Hosni Mubarak, stepped down.

The allegations first surfaced in an Amnesty International report published in the aftermath of the March 9 protest. The report claimed that in addition to the virginity checks, a number of female demonstrators were also beaten, strip-searched and threatened with prostitution charges.

More cringe-worthy comments from the general:

“The girls who were detained were not like your daughter or mine,” he told CNN. “These were girls who had camped out in tents with male protesters in Tahrir Square, and we found in the tents Molotov cocktails and (drugs).”

CNN spoke with one of the women named in the Amnesty report, Salwa Hosseini, a 20-year-old hairdresser, after the allegations first surfaced. Her take:

The craze of planking 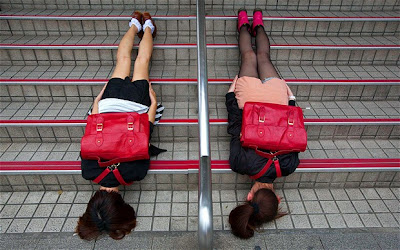 Planking in pictures: the internet craze of lying down in unusual public places - Telegraph 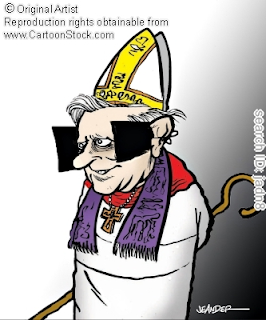 "Irish director Peter Mullan's movie 'Magdalena Sisters' will await the Pope during his visit to Croatia from 3 to 5 June.

Gay Zagreb activists have decided to hold an anti-church film festival called 'Pop(e) Film Festival and to present only movies that talk about non-pleasant issues for the Catholic Church.

While hundreds of thousands of people wait to cheer the Pope in the Croatian capital, gay Zagreb activists have announced a provocative event.

Besides the Peter Mullan's film, the festival will show other movies that talk about paedophiles, homophobia and other themes connected with problems inside the Catholic Church."
Croatian Times Online News 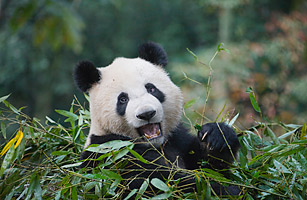 "This may sound heretical, maybe downright mean. But let's not mince words: pandas are evil. Oh, but they're so cute, you say, they're all chubby and fluffy and bumbling. They have those sweet, complacent smiles; they eat bamboo! Well, listen here. The first step to getting over pandas is to imagine the coloration of their black-white fur as being the inverse of what it is — you see? Now it's less cuddly exotic woodland creature and more of a freakishly large raccoon. Slothful to the point of being circumspect, pandas loll around, knowing full well that most of the humans in their midst will fall for their deceptive, charming spell.
What most people don't realize is that pandas have us duped. They are the one species in the animal kingdom that seem to live outside the realm of Darwinian science. Most creatures in the universe follow German philosopher Friedrich Nietzsche's axiom: a creature "will strive to grow, spread, seize, become predominant... because it is living and because life simply is will to power." Pandas, though, didn't seem to get the memo. They have no will to live or reproduce. To this day, scientists have to perform grotesque procedures to keep the panda population from collapsing into oblivion. Forget about the fact that pandas are mean-spirited, mate-abusing, progeny-mauling, deviant monsters. Forget about the fact that these hoodlum bears have conned humanity with their supposed cuteness. The most evil thing about pandas? The cunning with which they expose the stupidity of us humanoids. 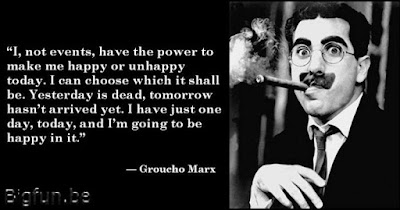 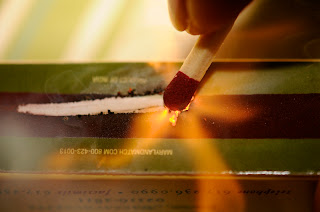 Every image in this collection was captured in 1/1000 of a second-300x faster than a human blink-the briefest of moments that we would miss if not for the remarkable capabilities of the modern camera.
via Gizmodo /more 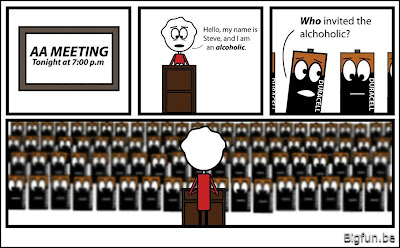 Animals Dressed as Other Animals 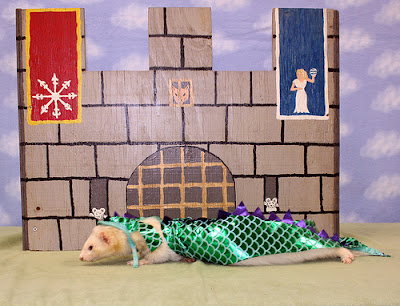 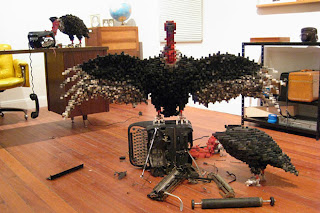 "Shawn Smith, an artist from Texas, transforms images of nature into real-life versions of the 8-bit artwork more commonly seen in games such as Space Invaders and Tetris, using hundreds of tiny wooden blocks."
Wired.com 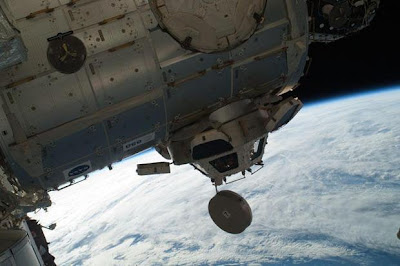 "NASA released photos of its space shuttle Endeavour's recent mission. It undocked from the space station for the final time last night.
The Endeavour shuttle left the International Space Station at 11:55 p.m. EDT Sunday, 'ending a stay of 11 days, 17 hours and 41 minutes at the orbiting laboratory,' NASA said on its website.
Endeavour flew around the station at about 450 to 650 feet, and crew members snapped videos and photos of the station. NASA released the photos today, offering them for public use.
The Endeavour plans to spend another two days in orbit and then it will land at NASA’s Kennedy Space Center in Florida on June 1."
read more 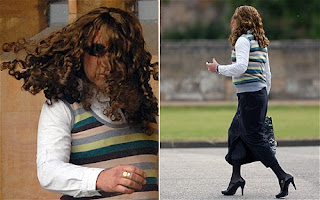 A male company director appearing at court tried to evade the waiting media attention by dressing as a woman.
via Telegraph/read more 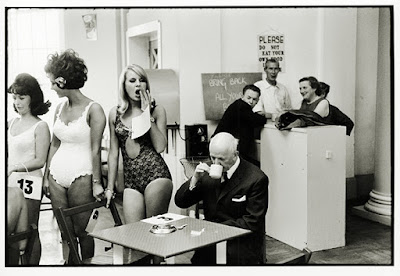 When photographer Tony Ray-Jones returned from New York to Britain in 1965, he toured seaside towns, villages, cities and festivals, documenting the English way of life 'before it became too Americanised'.
via guardian.co.uk/more

"Footballers, we're told, should be role models. A few months ago, Wayne Rooney swore into the camera during a live televised football match, and the world briefly reacted as though he'd burst into a toddler's birthday party and brutally molested a duckling. The general consensus was that he was being a bad role model to the nation's kiddywinks. Rubbish. He was being a brilliant role model. He'd just scored a hat-trick – thereby excelling in his chosen field – when a cameraman (who, by all accounts, wasn't supposed to be standing that close to the players) poked a lens in his fizzog. At which point Rooney demonstrated an entirely healthy instinctive disdain for the cameras, for the media, and ultimately for all the hoopla surrounding his primary task, which is kicking balls into nets. He'd just scored a goal and everything else could, quite literally, "fuck off". Good for him.

Conversely, anyone who took to the airwaves to huff and whine about Rooney being a poor "ambassador for the game" was an abysmal role model for children. Remember, kids – it's not how you play the game that matters, but how prosaically servile you are in front of the cameras."
By Charlie Brooker/ The Guardian /read more

You. Put Me Down This Instant. 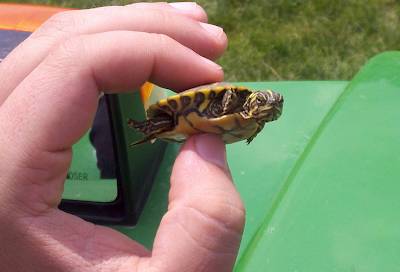 Pandas get 'tunnel of love'

The first giant pandas to live in Britain for almost two decades are to have a ‘tunnel of love’ to encourage them to mate and a nursery for their offspring, it has emerged.
via Telegraph/read more

A cat chillin hard on a bike 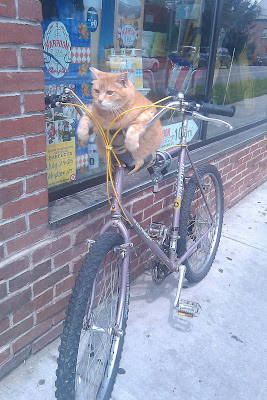 Get Them While They're Young


As everyone knows, children are impressionable because they lack experience, so they tend to believe anything that people in positions of authority tell them. That is exactly why they need to be protected from this sort of abuse. If religious people of all stripes truly believed in the truth of their faith, they'd allow children to reach adulthood before exposing them to religion so they could make their own decision about what (if anything) to believe.
via guardian.co.uk

The Best Cartoons of the Week 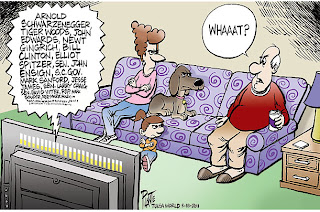 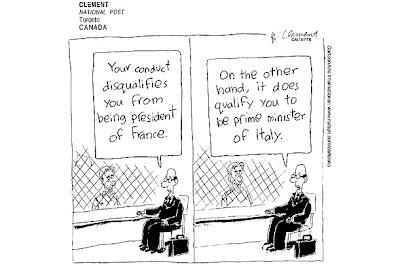 Cartoons of the Week - TIME.com 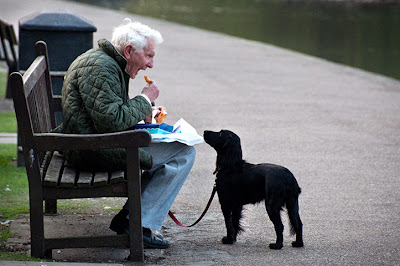 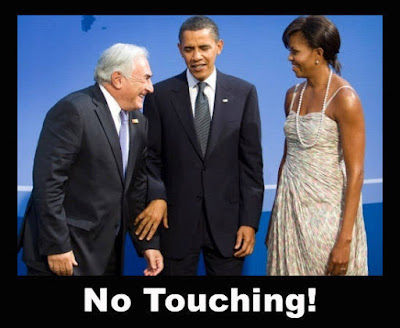 "A new Facebook app is coming out that will remind users exactly what they were doing a year ago from that day. Nine times out of 10, the answer will be 'wasting your time on Facebook.''
–Conan O'Brien
Late Night Jokes

Their Army Will Assemble Tomorrow 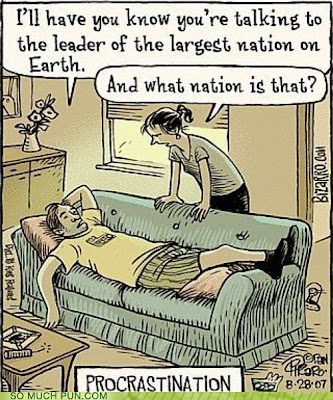 Gil Scott-Heron - The Revolution Will Not Be Televised


The musician and poet Gil Scott-Heron – best known for his pioneering rap The Revolution Will Not Be Televised – has died at the age of 62.

Posted by Slavenka at Saturday, May 28, 2011 No comments: link to this post

Christian the lion, our joy and pride 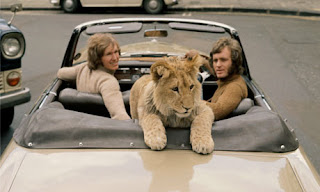 "In 1969, John Rendall and Anthony Bourke bought a lion cub in Harrods and raised him in their Chelsea flat. But what happened to the cub when he grew up?"
via The Guardian /read more

Posted by Slavenka at Saturday, May 28, 2011 No comments: link to this post