Half a million US homes are left without power as Hurricane Sandy unleashes floods, gales and even snow... and it hasn't hit land yet 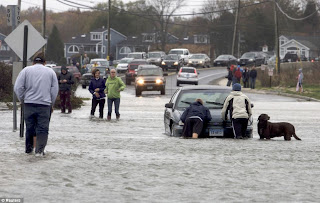 Half a million people have been left without power as Hurricane Sandy batters the East Coast ahead of her landfall tonight - and authorities have warned they will switch off power across areas of Manhattan, potentially affecting millions more. As Sandy barrels towards New Jersey, where it is expected to touch down at around 9pm on Monday, at least 500,000 people across Connecticut, Delaware, Maryland, Massachusetts, New Hampshire, New Jersey, New York, North Carolina, Rhode Island and Virginia are without power. And, with utilities company ConEd calling customers to warn it will shut off power lines across Manhattan and Brooklyn, millions more will be affected. The company shut off power in 200,000 homes in the area in last year's Hurricane Irene - but this year's storm packs a much fiercer punch. Sandy, which forecasters said could be the largest hurricane in U.S. history, has revealed the first signs of her monstrous power, dumping snow, breaching rivers and forcing floodwaters into towns and homes across the East Coast.