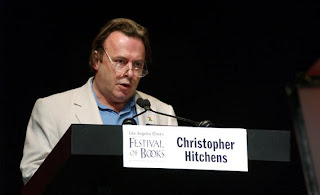 "Before being diagnosed with esophageal cancer, Christopher Hitchens wrote in his memoir, Hitch-22, “I want to stare death in the eye.” This seems, of course, an impossible blustery task, but in his last book, Mortality he comes astonishingly close to pulling it off.One of the many remarkable things about this remarkable collection of observations about what he calls “living dyingly” is that Hitchens doesn’t resort to charismatic English humor as a way of deflecting the difficulty of his subject—which is not to say that he is never funny or that there aren’t flashes of his characteristic wit throughout, but rather that he doesn’t allow irony or humor to overtake the truth-telling that is his real business here. He does not use his considerable comic gift as a way of not facing or not examining or not describing, which itself is part of the courage that the book both documents and enacts. If he were here, Hitchens would object to the idea of courage. He says that the word courage should be reserved for voluntary situations, for things you willingly do: He rightfully points out that he has no choice about the things people are calling him brave for.What is powerful about this book is that Hitchens is doing a close reading of death; he is examining its language, critiquing its clichés."
via Slate Magazine / continue reading