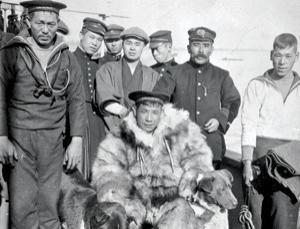 "In the story of the race to the South Pole, Shirase is the invisible man. A Japanese explorer, his part in one of the greatest adventure stories of the 20th century is hardly known outside his own country. Yet as Scott was nearing the pole and with the world still unaware of Amundsen's triumph, Shirase and the Japanese Antarctic expedition sailed into Antarctica's Bay of Whales in the smallest ship ever to try its luck in these perilous waters. On 19 January 1912, the little wooden schooner sailed up to the edge of the Ross ice shelf and left Shirase and his men to scale the immense wall of ice ready for a daring dash south."
By Stephanie Pain/ New Scientist /more