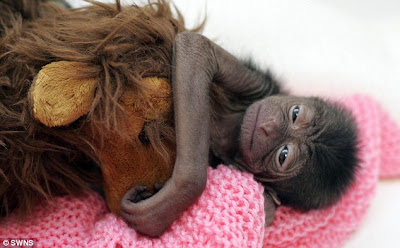 "A baby gibbon has bonded so strongly with a cuddly camel given to her as a surrogate mother that she cries like a human infant if the toy is out of reach.

The ten-day-old female, an endangered Siamang Gibbon, was at risk of starving to death and weighed just 18oz after her mother failed to produce any milk.

But Sadie Garland, primate keeper at Noah's Ark Zoo in Bristol, stepped in to bottle-feed her - with the help of the toy camel and a minute feeding pipette.
via
Posted by Slavenka at Friday, September 26, 2008